There’s a certain frustrating dichotomy with MILFs. On the one hand they are incontrovertibly GAGGING FOR IT, on the other hand there’s always some reason that they are over thirty and single and that reason may well frustratingly interpose itself between your game and her pussy.

However… sometimes I find MILFs harder to fuck. You get them out and then it just seems to fall apart. Why? Because there’s a reason they’re MILFs; and there’s ALWAYS a reason. Literally NO GIRL is over thirty and single solely because of a ‘supply problem’ or a ‘lack of quality men’. It’s always due to their own failings and fuckwittery. Virtually every woman is born with the raw materials required for sexual success: if they don’t get fat or unpleasant some man will pick them off before they’re thirty.

Take a recent MILFcounter of mine,  for example. She over-the-shoulder opened me in a bar, commenting on my colourful bracelet (placed there for exactly that purpose). She kinoed me immediately and kept reopening me after I rolled off. Some outrageously keen text-game and she’s on a date. Five minutes in and I know why she’s 33 and still single: she’s a fuckwit.

She’s no fool, but she’s an idiot and she makes a few subtle mistakes that mean that once she’s no longer in an age bracket that makes the endless, gruelling persistence worth it for the average chode (in the FSU this would be over 25, 26 at a push) then her own small quirks, which would have previously been steam-rollered over by months of diligent chode persistence, now mean that 99% of chodes would simply give up.

What was the main problem with this woman? One I’ve seen innumerable times with different girls: they’re keen but they come forward too much, ask too many questions and try and direct the conversation. In other words their conversational skills are more masculine than feminine. With a strongly feminine woman she will, like a good dance partner, follow the lead and then sprinkle feminine charm into the conversation to make it delightful and flowing. It’s the man’s job to create, it’s the woman’s job to facilitate and add sparkle.

On a date with the average guy he will, unless a naturally dominant man, be secretly relieved that here’s a girl that he doesn’t have to struggle to make conversation with. She’ll steal the frame and lead and within ten minutes she’ll mysteriously (to her) no longer find him attractive. The correct response to this is of course to ignore her, look away, steal the frame, snip and stack and then crush her frame, and only two types of men can do this: PUAs or naturally dominant men. I shudder to think how little sex these girls actually get.

This girls second problem is just a general obtuse randomness. She’s a poor bet for repeated dates because there’s no direct relationship between game applied and the result. We all know that women are illogical but I’d argue that when it comes to game there’s nearly always a consistentcy between your game and their responses. If you don’t fuck her or she won’t respond to your texts you can nearly always find a reason. With this MILF I can’t be guaranteed of that: she’s just too ditzy and unpredictable. I could do another two solid, perfect dates and have her just disappear forever for some unknown reason. It’s a very poor bet. The result? I’m willing to invest one more one-hour coffee date and beyond that it’s “dinner and a DVD” at my apartment; then it’s ‘put out or get out’ time.

And this is the interesting thing about some girls: they’re almost unfuckable. Their default behaviours in the mating game result in them being bred out of existence. Why? Because for the last so many tens of thousands of years their female ancestors’ mating habits were controlled by their fathers and brothers. They were force-partnered off at a ripe age and simply had no say. Now those social strictures are removed their fuckwittery is unleashed and they can promptly extinct themselves. 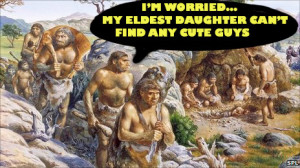 The lesson I’ve learned with MILFs is that if they’ve never been married and divorced then by and large the best game to apply is to utterly crush them. Dominate them, crush their frame, bamboozle them and ruthlessly physically escalate, dragging them home and obliterating all the crap that comes out of their mouths.