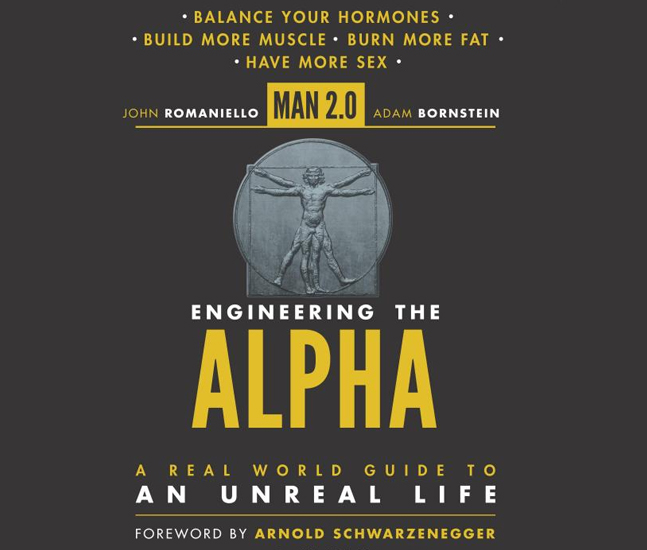 This is an important book but a weird book. There’s a lot of hype around it… is it just another fitness book? Is it just another paleo book? Is it a manosphere book? Certainly on the latter I was skeptical given it’s on the New York Times bestseller and can be found in any bookshop.

If you read it you’ll think ‘what is this?’. It’s obviously about diet and physique but the authors start talking about mythology and weaving in Joseph Cambell’s “monomyth” theory, then there are even chapters talking about ‘alpha’ and trying to define what ‘alpha’ is. Then they try and blend it all together in an exercise and diet program and talk about how following this program can change men’s lives. Weird. And the authors have obviously been deeply into Game at some point as there are plenty of game references and Neil Strauss is even thanked in the acknowledgments list!

Man 2.0 is another exercise and physqiue book but a unique one. It’s the first book I’ve seen which cuts through all the fluff about nutrition and squats and talks about the dark heart of exercise, the thing which will dictate your success or failure more than anything else and which most books never even mention….

Man 2.0 is to the large part concerned with hormonal balance and how hormones affect men. They do something very bold in this anti-male day and age: they make the very real case that correct testosterone and oestrogen levels are incredibly important for men and affect more than their physiques: they affect their whole lives.

And this is where it becomes more than just an exercise book. The authors feel very deeply that men are suffering from low tesosterone and the terrible effects that that brings: reduced libido, poor sexual performance, low motivation, low energy levels. They set out a passionate case for increasing your tesosterone and HgH levels and reaping the rewards in your life.

And this is where it gets interesting. The authors believe that correcting hormone levels can make such a difference to a man’s life that they believe achieving this is an epic and life-changing journey for a man. They have chosen to try and embed this belief in their readers by weaving this journey into a Campbell-like monomyth story. Joseph Cambell wrote a book called “The Hero with a Thousand Faces” and he argued that across literature, drama and mythologies there really was one generic hero’s journey story with very similar phases. In other words Luke Skywalker and Star Wars bears resemblances to Homer and the Odyssey. The authors have tried to use this monomyth to engage their readers in this transformation and get them to view themselves as the hero of their own life story. They describe how the average joe, plodding away in the gym in confusion is living in “The Ordinary World”. Then this guy meets a mentor (the authors of the Man 2.0 book) and goes on a challenging journey (the program) and eventually reaps his reward.

It’s a very unsual approach and I couldn’t help but thinking it bears a resemblance to most guys’ journeys through game. I wondered if the authors had gone on game journeys, found some success and were then basing their structure around those game journeys. Does it work? If you’re into game it’s redundant. It’s just hundreds of pages, some of it admittedly quite interesting, talking about the monomyth and various evangelical stories of personal change. It’s just not neccessary. If you’re not into game: it could work. You’ve probably never been on an ego-shattering journey of personal development where you’ve had to abandon all your cherished beliefs and try a new path. Viewing yourself as the hero in the monomyth is a nifty trick that just might work.

And ego-shattering it could be. Because what the authors say is what I witness with my own eyes: people cling to their own little exercise beliefs and routines just like blue-pill guys cling to their own little anti-game systems which don’t get them laid. Guys will do the same thing in the gym for years and never make real progress and they won’t change because they’ve convinced themselves that it works, just like the fawning hipster chode that crawls round women agreeing with them and finally gets laid after four years and thinks…. “it worked!”.

Man 2.0 talks a lot about Alpha males. And it gets quite weird. The authors state that a man’s goal should be to become alpha, but then spend a long time defining, or ‘redefining’ as they put it, what Alpha means. And it’s sugar-coated. Their definition pretty much boils down to “being confident but not being a dick”. It read to me like the mid-phase in someone’s game journey where they start realising that all this trying to be alpha stuff wasn’t for them, then sit and decide who they want to be. I ultimately found it all unneccessary for the book. I mean.. why bother? It’s just redundant. It made me wonder if this part of the book was in fact a massive sugar-coating for daring to suggest that men need to increase their testosteron levels to become more manly. Is this the anti-backlash protection that they inserted?

And I can’t deny that they need it because they do something very bold for the fem-centric mainstream these days. The authors outright say that sex is important for men, they define themselves by their sexual potency and they are unhappy when they feel less virile. More testosterone = better sex and they say for men that is a good thing. Pretty obvious to all the Manosphere but let’s not forget this is sitting on the shelf in high-street bookshops and in this anti-male, anti-testosterone world that is a pretty bold thing to say, sadly. I have massive respect for the authors in being straightforward in making this case.

Now let’s move onto the meat of the book. First, as I said, the whole program is about controlling your hormone levels. What you will get from this book is a basic understanding of what the following hormones do and how they are affected by your actions:

This information alone makes the book worth ten times its cover price. If you ignore all of the book bar this it’s worth buying as this information is absolutely priceless.

Next, the authors will brutally chop down some of the tropes that the exercise industry spews. First, they go at great length to explain how if you’re not conscious of your hormones you’re probably never going to achieve your goals. This alone is a sacred cow. Go look at all the men’s fitness magazines out there. How many of them have “Five moves for big biceps” compared to “five things you can do to regulate your insulin sensitivity”? Probably none. And that’s because hormones are difficult and complex and these magazines just spew the same thing they’ve always done.

Hormones are where it’s at. Have you never had the friend who goes to the gym with you, does half what you do, eats half as well, yet has half the body fat and is jacked to fuck? I have. Read some of the stuff written by Charles Poliquin, one of the world’s foremost trainers. His entire “Biosignature Modulation” program concerns reading and adjusting the trainee’s hormonal profile.

Beyond this the authors get busy slaughtering some sacred cows of the exercise industry. This chapter again made the book worth its weight in gold for me as it was a wake up call to accept what I’d had the niggling doubts about anyway for years. Here are some of the cows that get killed:

This is the stuff people’d been ramming down my throat for years and I assumed had to be true. Yet finally someone comes along and says “that’s horseshit” and it just clicks with me that, yes, it is. Take the first one. That single trick alone has suddenly made me DRASTICALLY more able to tolerate calorific reduction that ever before.

Whenever I was operating at a calorific defecit I’d try and have a good, big breakfast, a smaller lunch and a smaller dinner. The result: I starved all day and was dying by night. After reading Man 2.0 I did the very simple trick they suggested: skip breakfast. And they were dead right. It’s easy to prolong your night fast until at least twelve noon. Easy. But once you start eating it is so much harder to stop. In the last six weeks I’ve lost eight pounds through a few simple steps and the one that has been the single greatest help to me is this one. Now I get up and just fast till noon. I eat a 600 calorie breakfast then don’t eat again till after training. And by the time I finish training, which is early evening and then joy, oh joy! I still have well over a thousand calories left to eat! It’s EASY. It’s SO EASY to live with calorific defecit if you do it this way.

I spoke to my step-mother on the phone and was mentioning my new program. She said to me “you know… when I worked I used to be slim because I’d jus get up and rush to work and have a coffee and not even bother eating till twelve or one and just eat something small..then go through till evening and have a good dinner. Then I retired and joined Weight Watchers and they said ‘you have to eat good breakfast’ and I did and now I’m bastard-well starving all day”. She’s now instantly dropped breakfast and is going back to eating twice a day.

The authors talk about fasting a lot as well and its effects on HgH production. Did you know that by fasting you can naturally increase your HgH levels by 2,000% percent? I didn’t. Fasting is working for me as well and I’m following the simplest procedure they describe: the 8/16 split. I try and eat all my food each day in an eight hour window so I get sixteen hours of fasting per day.

Ultimately the book does prescribe a low-carb approach and it’s fair to say that it falls into the ‘paleo-ish’ camp. In the program they outline the first phase, which is four weeks is designed to ‘hard reset’ your insulin levels and the first two weeks of this are zero carb, with carbs then being slowly reintroduced as required by exercise. I’m still not convinced on the low carb stuff, especially after listening to Danger And Play’s podcast. For me I always just feel shit when not eating enough carbs and I get really hungry. I also don’t buy the whole paleo argument anyway. Cavemen didn’t live off tons of meat: that’s just pure bullshit and another form of faddery.

So what you’ll get if you buy Man 2.0 is the following:

This book isn’t perfect, but it’s a start and it’s worth its weight in gold. It’s fostered an interest in hormones to me and to be perfectly honest I’m now very curious about researching TrT and going down that route… but that’s a whole different journey.

If you liked this review, click here to buy on Amazon: 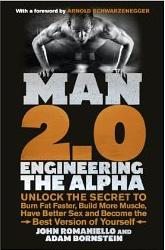