It was an easy score. She’s 20, Uzbek and sexy – looking like a vampish Kill Bill assassin. Thin, exotic and with a great ass. A fun double date with Tom from Citydaygame, a few text messages and then a second date. That was an hour long walk in the park then a bounce to my apartment. Some LMR but then it was on… super on. This girl just adores fucking. I banged her three times, and for fun frigged her cunt till she screamed and squirted all over my rug. I surreptitiously sniffed it and proved my long-running argument with now disappeared holisticgame, ‘squirt’ is just wee!

The sex was good, but I felt fairly detached. When she went all I could think of was how I could fulfill my weaselly hints that I’d date her by giving her a fair crack to win me over. Within a day she was being a stupid cunt and trying to provoke emotional drama with silly, made-up arguments. It reminded me of how wops: Colombians, Argentinians, Italians and Filipinas in particular live their animalistically colourful lives. Fuelled by their TV addiction and tiny minds their women constantly create drama and gossip so they can enjoy daily hits on their emotional crack-pipe.

She’d started to be a pain, so I ignored her and was scot-free. She’s 20, hot, loves to fuck and I realised I simply don’t care much. I’m far more interested in knuckling down and getting some serious daily work done on DBATS 2. I want to feel the self-satisfaction of productivity (that’s the white-man version of woppy melodrama).

Warsaw is a beautiful city. Life here is so much better than in Newcastle. I stroll the streets each day and just tootle on with my life, coming to a realization:

I’m not sure how much of a shit I actually give anymore, about Game.

Is this a new meta, meta weasel? Do I just need some time off?

I’m not sure it is. In my acclaimed daygame story of Bottom-World Squalor I included a Victorian aphorism: “it costs more to revenge injuries than to bear them”. The last few years haven’t been easy and I wonder if Game has in fact resolved my ‘woman issues’ but not in the way I expected; namely that the hassle, stress, time, expense and emotional instability involved with trying to constantly, regularly fuck new women is not worth the actual reward, which seems to be a fleeting moment of carnality then a ceremonial update of a secret spreadsheet, then a bit of a smug feeling the day after.

When you’re oldish, a natural introvert, an ex-sufferer of Avoidant Personality Syndrome, no better looking than average and don’t have a cunningly engineered social system to milk then getting girls is really fucking difficult.

I don’t really care much about sex anymore. I think this is to do with getting old, AND I WELCOME IT. Life is so much more pleasant now than in my twenties or early thirties, where I’d feel physically ill from lust and slowly become mentally unstable from unresolved sexual frustration. I’m on TrT now, and the funny thing is that my testosterone is probably higher now than it ever was then. I know it is, because I have superhuman recovery ability. However, I’m still just not that bothered about sex. It used to feel like food, or a powerful drug. Now it feels like, meh, taking a shit or something, or going for a coffee. I repeat: this is great! The very last thing I want is to now revert to my earlier condition.

Before the pathetic Game-denialists start crowing there’s an important point to make: the other thing making me not give a shit anymore is the result of doing so much work and actually getting some results. Coming into Game so damaged (and old), I set my targets very low. After all, the lower they are, the easier they are to reach!Unlike some other gamers, I’m not at all motivated by competition with others. I’m internally-referenced. The thought of making a rod for my own back is horrifying. 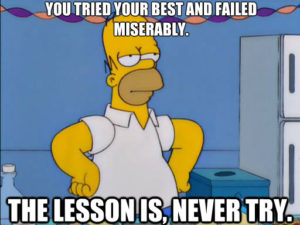 The initial thing that propelled me: the demons, can be described as this:

In a few dozen lays and a good few year work, these are all now resolved. They’re just not there anymore. I have had a rough couple of years, but I’ve clawed myself back, had a few hot girls, improved my inner game and it’s now pretty much done.

I’m not quite there. I’m 7 lays off my lifetime goal. These are quality lays, like non-shame, white-ish HB7’s with a decent lolz story. I know for a fact that if I wanted to I could stack up 15 lays or so over the 3 months of winter in Asia every year for another five years at least, but that doesn’t really count. Seven more, then I’m done. Calling it a day, the Notch-Count Hyena is off my back and I can relax.

I mean, I’ll probably still actually do game, but it’ll be blissful knowing I don’t have to.

I want a girlfriend, preferably after, or close to the end of my notch-gathering. During a recent mini-breakdown I consumed enough Haribo and energy drinks to have hallucinogen-level insights. It’s the Now that matters. Through notch-hunting all I’m doing is making my Now stressful in the hope of acquiring a blip in the future to make up for something that is gone and forgotten in the past. What really would improve my now is two things. First, not doing game. Second, having a girlfriend.

I didn’t mention it much, but from daygame I actually had a long term girlfriend in London. An English (yes, English!) girl 15 years my junior. I liked her. I liked dating her, and I want this experience again. I’m not throwing the baby out with the bathwater. I’m not getting all “love women bro”. Look, notches are important. You have to put the demons to rest. Once that’s done, however, what’s the point? The more game you do the more you damage your ability to connect with women, and unless you’re broken, that is the most powerful and rewarding experience.

The extent of faggotry to which I’m capable is quite breathtaking. Hardened PUAs who know me would be sickened to learn how much I enjoyed having scones and tea in quaint cafes with my patootie. Farmhouse lunches in rural artisan compote workshops. Knick-knack hunting in flea markets. Long, made-up stories complete with invented languages, exchanged by text message. I love all that shit. PUAs across the world now shudder, as they sit in their soiled Y-fronts and play their sixth consecutive hour of Call of Duty 4, or sixth consecutive hour of online convincing others that computer games are cultural enrichment.

Of course, the best laid plans of mice and men…. Girlfriends don’t grow on trees, and I’m talking about dating a really bloody nice one. Actually getting the fucker could take a year. And again, Game-denialists take note: I suggest only long-term dating a girl when several conditions are met:

I have all of these. All acquired now through five years of nightmare self-development and intermittent game. I know men who settled early, who picked the girl rather than the grind, and are paying for their lack of chops right now. A shark can wear a tweed blazer and a powdered wig and sit having high tea in Claridges, but it’s still a fucking shark!

I’ll probably cover these areas again in a future blog-post, when I possibly completely change my mind.

« Colombia » A Wolf in Rabbit’s Clothing