Ahhh daygame! The noble pursuit of the urban pussy-footpad. The legerdemain of the pavement conversationalist…. I remember daygame. I sometimes forget how much daygame I’ve actually done: well over a thousand sets so far. As my time in limbo draws to a close my imminent departure to catch the late european season lurks just round the corner.

In this note of reminiscence and preparation what could be more fitting than dusting off the old memory chemistry set and trying to synthesize a few concepts? Those potions could come in very handy in the forthcoming weeks.

Hiss! Whizz! Bang! I present… with tongue firmly in cheek regarding these ‘clickbait’ style posts….. ‘five traps that intermediate daygamers fall into’.

As a beginner weaseling was easy to do and easy to recognize. A voice in the head said “this is horrible” and an emotion of unease spread through the body. A little later you saw a hot girl and another voice popped into your head saying “mmm, SHE LOOKS LIKE SHE’S CONSUMED IN THOUGHT, perhaps you’d better skip that set”. Perhaps you saw another target a little later and the same voice kindly warned “SHE LOOKS ENGAGED, HER HUSBAND WILL ARRIVE ANY SECOND AND BEAT YOU UP “. These are weasels, and we all get them. 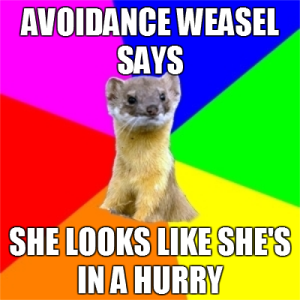 Eventually you ground through multiple hundreds of gut-churning opens, coming up with an elaborate range of rituals, mental tricks and downright superstition to get round the fear and deal with your weasels. No longer did you have to pack a change of underwear and wet-wipes in your man-bag

That was weaseling, and now you’re intermediate you’ve progressed onto meta-weaseling. It takes an intermediate daygamer to meta-weasel, and an intermediate-intermediate to recognize it. This is not old fashioned, simplistic, weaseling, this is weaseling on an altogether more sophisticated level. Here’s an example. The newbie doesn’t want to approach so he weasels and doesn’t approach. Simple. Now the intermediate, deep down, still sees the approaches possibly as tedious (see ‘Entitlement’ below) so really doesn’t want to do them. So, with immeasureable cunning and working at the deepest levels of the hindbrain what Avoidance Weasel does is this: he comes up with the idea that to stop yourself weaseling you will set a number of sets that you have to reach, say ten on a day. Then, with the forebrain not fully cogniscant of what’s going on you grind through ten lifeless sets without much intent and then think “I did the work, I ticked the boxes, I can go home satisfied now, you can’t win ’em all”. It’s a subtle and devastatingly devious mental trick: you used a way to stop weaseling in order to weasel. 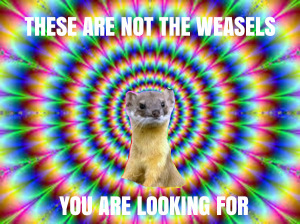 Another example of sophisticated weaseling is instant dates. A beginner starts by not believing such a thing is possible, and dreams of the day when he can stop a hot girl and minutes later be sharing a heartfelt cappucino in a warm and cosy Starbucks, both of you deep in rapport and you, as the needy noob, outlining not so subtly why you are better and more special than all the other guys out there. To an intermediate daygamer idates are old hat. You’ve had them, thrilled at them, gorged on them, sickened yourself of them and now finally doubt their efficiency at all. Yet on a day when you don’t really feel like doing daygame you mysteriously hook your first set and wander off for a two hour long idate leaving your wing miserably trudging solo up and down the streets. What you’ve done is used getting an idate as a means to avoid doing more opens. Kudos if you’re capable of this, as it takes a fair whack of daygame skill to be able to implement with any sort of controllability but, if you do do it, but it’s weaseling nevertheless.

The solution: Learn to recognize the spoor of Meta Avoidance-Weasel.

Beginners obsess about AA (approach anxiety) whereas intermediates obsess about vibe. Once you have a certain level of awareness and of experience you see the stupendous effect that vibe can have: like injecting aphetamines into a five year old child at a school sports day. Vibe is the steroids of the game world. Vibe can turn ten opens into ten numbers. Vibe can do anything. Intermediates have done enough sets and enough sessions to have magically been ‘in state’ at least a half dozen times and seen these jaw-dropping effects. The result? An endless quest seeking to recapture that golden vibe phase and reap its rewards. Easily half of all wing-banter between intermediate daygamers is long soliloquies micro-analysing their vibe and state and relentlessly speaking aloud how they want the day and their mood to pan out as a means of auto-suggestive forebrain to hindbrain control.

You’ve had a few lays from daygame and you sit one fateful day and make the decision to work out “your ratios”. “My god!” you exclaim, “I got laid once for every X approaches! Crikey! If I just do that number of approaches again I’ll get laid again. Hang on! If I daygame every night after work I CAN GET LAID ONCE A WEEK!!!”. Out you rush and engage in a few weeks, or months, of cranking the handle and waiting for the tsunami of vagina to wash over you.

Except it doesn’t work. Your love of the game, dare I say your vibe, declines as you turn it into a soul-less cranking of the sausage-machine. Your ‘ratios’ plummet and you start to wig out that something’s wrong with your game. You do more sets. You’re worried you’re weaseling so you get tough with yourself and learn to grind through game even though you’re not enjoying it. A truly intermediate trap: by now your forebrain control is so good that you can overrule the hindbrain and sadly miss the crucial message it’s giving you: something’s wrong! Usually the human’s right, but sometime’s the chimp in you is right as well.

The solution: Ignore ratios. Less is more. Have fun.

“My type of girls are twenty-three to twenty-four year old Chinese sculpture students, kookily dressed, introverts, but with quite a smart, sophisticated edge to their clothes, narrow faces and that Japanese-style hair with the straight fringe. Thin, bookish, probably few friends. Likes theatre. Dresses in green.” says the intermediate daygamer. “I’ve had two so far and it was like shooting fish in a barrel!”. So he troops round London for months consulting the tiny stack of game’s most wanted cards in his deck looking for his type of girls. It’s a far cry from when, as a beginner, he opened every single girl above a seven irrespective of their demeanour or fashion. How he laughs at the thought of opening those posh Chelsea girls and pierced and punky backpackers!

It’s a sad trap because it precludes all those other girls that perhaps are unwittingly your type as well. It’s an illusion you get as an intermediate. Yes, you do have far greater chances with certain girls but there’s no need to stop trying the other types too and most probably, the reason you have the success with “your types” is because you think they are your type. I’m guilty of falling into this trap. So was Krauser. The person who made me realize what a trap it was was Tom Torero, where looking through his victory album I was genuinely shocked: “but that’s a posh Kensington girl!”. Yup. “But that’s a Korean air hostess!”. Yup. “But that’s a dirty Nigerian single mum!”. Yup.

The solution: force yourself to open girls that you think ‘are not your type’.

You’ve put your time in. You’ve grafted. God the journey’s been tough. You kept a piece of paper and made a little mark every time you did a set. You’ve done hundreds! You’ve had some successes: a lot of dates. Some makeouts. Then a few lays. Yes, you managed to execute the daygame process from start to finish, finish being with your dick in a hot girl you saw on the street a while earlier. You achieved this a few times. Boom! That’s it. You’ve got daygame. Let the pussy wheel start turning. C’mon! Hurry!

Entitlement is a close cousin to ‘Losing the Love’ but slightly different. With this failing your mindset starts to become slightly infused with a tincture of entitlement. Not enough to spot immediately, but enough to make a difference, like putting a pin-head of bleach in a cup of tea. Your AA is barely there after a few warmups and completely fearless you simply walk away from girls that don’t give you an immediate eye-sparkle. Text game bores you: any obstacles a girl puts inbetween you and her pussy just seem unbearably tedious. You turn up on dates and just pour on the alpha-vibe and mesmer, grotesquely over-escalating and fucking up good leads. Entitlement needs to be rooted out. You have to find the love and enjoy the chase and enjoy the game for the sake of it.

The solution: don’t be entitled.

So there you go. Five little traps and five ways to avoid them. Articulating and recognising them is half the battle won. It’s all part of the journey!